The most beautiful New Year's dives in 2016 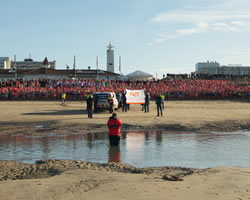 January 1, 2016 at the foot of Exit 18 will go down in history as doubtful and beautiful weather.
The organizer was no longer comfortable with submitting a new safety plan to the municipality of Noordwijk while this plan is the same every year. In the end, the alderman ensured that the opening of the 150th anniversary celebrations could go ahead after all. With the mediation of the alderman in a conversation with the mayor, everything was arranged in half an hour. Everyone was happy with this decision. The organizers made every effort to get the sponsors to join in again and beach restaurant De Zeemeeuw joined in immediately. 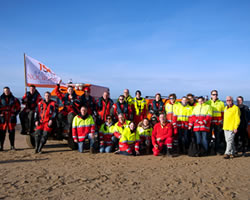 We were able to see it with our own eyes. The sun was shining, the sea water 9° and almost no wind.
At 1 p.m. all participants plunged into the sea under the fervent encouragement of Kees after a short warm-up. I think the full number of participants was achieved. The NRB was present with about 20 members to provide safety and first aid. All our vehicles were present and 2 times someone was transported by car to the boulevard because of becoming unwell and also a plaster was applied because of a cut in the foot. With a big bow our rescuers were in the sea as border guards. Of course the press was able to make enough beautiful pictures.

At half past one the beach was cleared and all the equipment was driven to the Mat.
Huibert was already waiting there with delicious hot soup, in 2 flavors, and sandwiches and a hot meatball. On top of that everyone could add a sauce to taste. After the hot lunch some members went home. 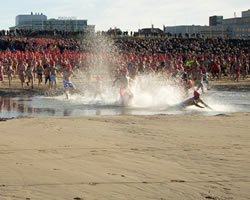 Then quickly to the Langeveld. At Nederzandt, the NRB reported and each brigade member could get another drink.
Around half past two the NRB reviewed the positions and made a classification. The situation on the beach and in the sea was clearly different than in Noordwijk. A large swamp had formed and over the bank the sea had become somewhat rougher. So there were 2 groups of security guards in the sea and a number of first aiders on the beach. 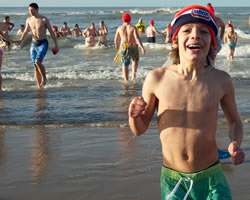 Led by wonderful music, the mood was set. All the visitors swayed to the invigorating music. The participants were waiting for the warm-up to begin in 10 seconds. The countdown to 0 began and everyone ran into the sea. Earlier than expected, without a warm-up, but a complete surprise for the organization. I think the full number of participants was achieved here as well. Many stayed in the swamp and did not go any further, but some went 3 times and also further into the sea. Here the dive lasted a little longer. I also saw some dressed up groups who did it for a good cause - girlfriend - or friend. The weather was a little less, no sunshine, but that did not spoil the fun. 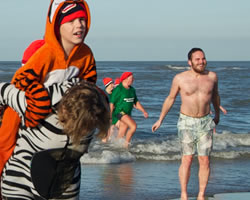 Nederzandt has had a great crowd of visitors, good for the business. NRB's cooperation with Nederzandt is also very pleasant.
For the NRB, it was no longer doable to drive to the ramp. One big mob went up at walking pace. Thus the NRB could not sign out at the organization. Some members of the brigade wanted to go home quickly now. The cars only had to drive once because our friend from the KNRM was also present and took the largest group back, for which we are grateful. There are no incidents or first aid reported.

At the Mat, all equipment was rinsed off and the survival suits were hung back in their proper places, the walkie-talkies were put back away and the doors were closed.

Thank you everyone.
A wonderful feeling that the NRB can now wait for a substantial contribution from the 2 events.